How to Dominate the Media to Build Your Personal Brand, Part 2 of 2 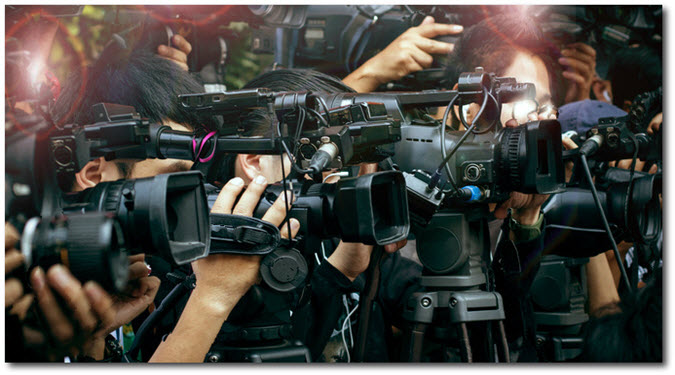 In this article we’ll dive into ways to get into the media via the spoken word through speaking engagements, radio/podcast interviews and television.

Each of these strategies still builds on and originates from everything you’ve read using the tips in my last article.

For anyone who wants to bolt past this part because of a fear of public speaking, relax. I’m not talking about speaking at a huge event in front of 15,000 people…yet. Most of those people are not in your tribe, unless it’s a very targeted industry or association event.

I’m talking about starting small with little break out sessions or a Chamber of Commerce event. Some examples might include simple gatherings, church meetings, and classrooms. If you’ve never done it, I know it sounds scary, but really, you just need to start speaking.

Eventually, your speaking repertoire should include:

• Panels – You’re at an association luncheon or some other conference at a table with two to four other people and a moderator poses questions to the panelists.

• Break-out sessions at conferences and symposiums – These are very powerful because there is a self-selection process; the participants have already chosen you over somebody else conducting a session at the same time. Your “know, like and trust” factor is already bolstered and these people will move further down your funnel than someone who’s never heard of you.

• Small events –These might include “lunch and learns,” executive roundtables, or short talks at networking groups; and can either be organized by you or someone else.

• Keynotes –Typically (but not always) paid speeches as a featured presenter on the main stage at a conference, convention, corporate gathering or other large event.

I’ve found that most people who have never spoken in front of a group before feel more comfortable starting on panels. It’s a little less pressure than standing by yourself in front of 500 people for an hour. Of the dozens of panels I’ve been on, I’ve always known what questions would be asked, or at the very least what topics would be covered so it’s possible to prepare in advance.

The key here is to have a few sound bites for each question because, just in case someone takes your thought, you’ll have something funny or provocative for everything that comes up.

I prepare for a panel discussion even more than for a keynote talk. Why? Because even though I go in and I’m very cordial to everyone, it is a little bit of a competition (at least in my mind). I want to get the most laughs, I want to get the most “ah-ha’s,” because when it’s over, I want to have more people standing in line talking to me than any other panelist. And you don’t do that by going in and winging it. You must be prepared. I’ve been booked for several high-paid keynotes by audience members who saw me do well at a panel discussion.

Now for those of you with a fear of public speaking, I know it can be a huge challenge. My advice: seek professional help if you need to, and just know that it does get easier.

After delivering several keynote talks earlier in my business career, I bombed horribly at a speaking engagement put on by a long time friend at the anniversary of a Boy Scout Camp in Pennsylvania where I worked as a teen. I could barely speak, and when I did, my voice was shaky. My knees were wobbly to the point I had to hang on to the podium for fear of falling down. I was sweating so profusely, and so visibly shaken that I later learned people thought I was having a heart attack on stage. Oh, it gets worse!

I went from there to delivering a presentation in San Francisco to about 40 key managers and direct reports at my former company. Guess what was going through my mind as I stepped in front of those 40 pairs of eyes looking at me? You got it: reminders of just how badly I had bombed only a few days before. Because of the negative self-talk and my lack of preparation and know-how, I bombed again in similar fashion! But, I wasn’t going to let those experiences get the best of me.

I had my assistant set up another speaking engagement right away, with the goal of 30 speaking engagements in 30 days. I didn’t care if they were networking groups, Girl Scout troops, or accountability meetings at the local Denny’s, I wanted to speak in front of as many different groups as possible as quickly as possible.

And, I did. The more I spoke, the better I got. And I just kept booking myself until I was comfortable speaking in front of people again.

So it can be done!

Don’t underestimate the power of radio and podcasts. They’re important tools in your media portfolio.

Here’s a caveat: being a good radio or podcast guest is not easy. You’ve probably heard someone who is an amazing person in real life, but then they get on a microphone and all of a sudden, their voice gets monotone, their brain freezes up, there’s no energy and it’s very difficult to listen to them.

The key to being a great interview guest is that you must have energy in your voice! You’ve got to be engaging.

Prepare for these interviews, no matter how small you might think it is. I generally know what we’re going to be talking about, or what the podcaster usually talks about. Do your homework; listen to a couple of their shows to get an idea of their style and what kind of questions they ask. And with your preparation comes the ability to really be present on the interview and let the real you come out!

The funny thing is, most radio hosts and the lion’s share of podcasters want you to write the questions for them! They don’t want to do the heavy lifting or do the homework. So you have total control over what’s asked, and how to respond. However, if you’re going to go on some of the national shows that I’ve done, you’re not going to have that luxury. But for now you can test the waters, get on some podcasts, be interviewed and absolutely hand craft the message you want to deliver. Then, post the podcast recording or link on your website.

These are my top tips for being a great interview guest:

• Prepare your questions and practice your answers

• Start small and get practice being interviewed

• Have a smile in your voice

• Have a call to action whenever you can, such as directing them to go to your website for a free download

To find podcasts where you can be interviewed, search for your topic + podcasts. Send in your information with an offer to be a guest (they’re always looking for people to interview). Write up some questions and answers and off you go!

It’s so easy to get on these podcasts, it’s almost criminal. The interview itself does require an investment of time, but not a lot of skill or financial investment.

Of course, you want good sound quality for playback purposes. I do recommend getting a good USB microphone (not expensive) and using a headset during the interview. IMPORTANT: Whenever possible avoid the use of your cell phone or even a landline.

Remember, how you sound is part of your personal brand, and you want to sound superb!

Television is where everyone wants to be. It’s the holy grail of media. I’ve done a good amount of television, and I’ll do more. But I started small.

Many years ago I had a restaurant in Santa Barbara, CA, that I was trying to sell. It was a tough economic time, and I hadn’t even owned the place a year so there was no track record of success. For some personal reasons, I wanted to sell it quickly. So I came up with a crazy way to sell the restaurant, and it was so crazy it was newsworthy. As a result, I did several local TV spots in the Ventura/Santa Barbara/San Luis Obispo area.

And then I didn’t do anything on TV for years. Then all of a sudden national TV came knocking.

You have to be ready for it. And when it happens, don’t get too wrapped up in it. Don’t think, “Hey my spot aired on CNN and nothing happened.” That’s not the beauty of TV. The beauty is capturing the video and pushing it out to your tribe so that people see it.

If you follow me on social media, I’m playing clips from MSNBC that were from weeks or months ago. So every once in a while put your clip out there. Because if you’re speaking on a topic that you’re passionate about or is relevant to your industry or what you do, you’re helping your tribe.

I know some of you are going to have this negative voice in your head saying, “Oh, it’s going to look like I’m egotistical” or “I’m tooting my own horn.” Heck yeah! But you’re also helping people. Every time I post one of these videos from CNBC or CNN, I get comments like “Oh wow there’s some great stuff in there, this really helped me.” Every single time that happens.

That’s the craziest thing about your personal brand and getting yourself out there. None of it is actually about you. It’s about you helping other people.

I’ll share more about getting the coveted television gigs in a future article.

What are you going to do to increase awareness about you and your brand? Are you doing anything on Radio, TV, Podcasts, or with Public Speaking? What insights did you gain from this article? I’d love to hear about it below.

Operations are the support systems that enable your success. They are a necessary part of playing the game in today’s business world. Many entrepreneurs have no systems in place, or their systems are in their heads where no one else…
END_OF_DOCUMENT_TOKEN_TO_BE_REPLACED

Entrepreneurs are often reluctant to ask for help because we’re such a self-reliant bunch. We tend to believe that we “should” be able to figure everything out on our own, and then make it all happen without any outside assistance….
END_OF_DOCUMENT_TOKEN_TO_BE_REPLACED

Would you like to build an outstanding organization, one that progresses from good to great and beyond? Then you must have a clearly articulated vision and enough intel to guide you and your team. Many entrepreneurs lack a clear understanding…
END_OF_DOCUMENT_TOKEN_TO_BE_REPLACED

I’m sure you’ve heard the many stories of cyber hacking that have occurred in recent months and years, and sadly, that’s the new normal for life in the technology age. Nearly every day I come across a new, cleverer attempt…
END_OF_DOCUMENT_TOKEN_TO_BE_REPLACED