The Importance of Brain Flushing with the Positive

In this yoogozi teaching video, filmed in the kitchen of the broughtonHOTELS offices, Larry talks about brain flushing and the importance of it. The entire transcript is included so if you want to read rather than watch, go for it! 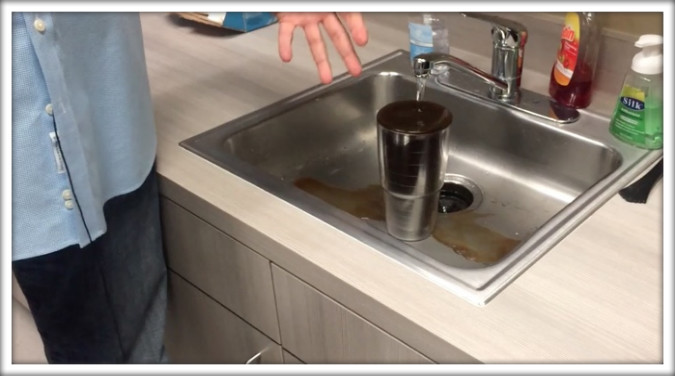 Sometimes it gets so bad that we don’t think that we are worthy of success. We don’t think that we’re worthy of people to love, and I’m just speaking of a personal experience, and I know from the thousands of people that I’ve talked to in my lifetime, and the hundreds of people I’ve actively coached that were all plagued with this, what I have found over the years is that we need to replace that negative chatter in our head with positive chatter, with positive mantras.

With great routines, with friends who speak great things into our lives. It’s one of the reasons why I wrote this book, FLASHPOINTS For Achievers, so that every day we can have a positive mental imagery, positive messages into our brain to replace all that negative crap that’s in our heads because honestly years ago I realized, I had this great visual; this is what my brain looked like not so long ago. This negative, dark, swamp like water.

The truth is that when we start imagining that this is who we are, this kind of stuff, this is how we start treating people. This is how damaged relationships happen. There’s only one way to change this, and that is to start putting some positive stuff into our brain. When you start putting positive messages into your life, when you start surrounding yourself with positive people, then we have to do it.

The more good, clean water that goes in, the more it dilutes this negative crap that’s in here. Now it takes a while OK? What’s happening is the clean water goes in and it starts replacing, displacing all the negative stuff. Over time the more positive stuff that goes in, the more dirty stuff that goes out. Now this takes a while to do, but honestly I have seen people’s lives transformed as they start putting this positive stuff in here.

Now what’s really important is not just to do great readings, not just to tell yourself positive images. Really sometimes we have to cut people out of our lives. That’s the hard part. We have to divorce ourselves, exercise ourselves, from negative people that are in our lives. Now this takes a while okay? Oftentimes what we have to do is put this into our heads throughout the day.

Now many of you who have been following me for any length of time know that I start every day with my morning routine. My morning routine includes positive mental imagery. It includes meditation. It includes prayer. It includes some great reading, but what I realized is I couldn’t get real clarity like the water that’s going into this glass, until I started starting my morning routine the night before, and that’s with a gratitude journal and really recognizing that no matter what’s going on in my life, even when I was at my bottom and bouncing along, and skidding along for a while, I still had great things that I could be grateful for.

In order to get a great night’s sleep I realized I had to actively with intention start identifying what are the things that I’m grateful for. When I went to sleep thinking about the things I was grateful for I actually got a better night’s sleep. I woke up more refreshed, and then I was in a better mindset to start my morning routine of positive mantras, meditations, readings and prayers.

No matter what we do it’s going to be a difficult journey to get to the clear water that we’re getting to here. I hope that you’ll dedicate yourself to lifelong learning and positive mental imagery, but that we’ve all got this. Don’t beat yourself up about the negative chatter that goes on in your head, but let’s get intentional about bringing more positive stuff into our brains.

Brain Flushing with the Positive

Does this make sense? How regularly to you put the positive into your brain? I’d love to hear your thoughts and comments below.

Operations are the support systems that enable your success. They are a necessary part of playing the game in today’s business world. Many entrepreneurs have no systems in place, or their systems are in their heads where no one else…
END_OF_DOCUMENT_TOKEN_TO_BE_REPLACED

Entrepreneurs are often reluctant to ask for help because we’re such a self-reliant bunch. We tend to believe that we “should” be able to figure everything out on our own, and then make it all happen without any outside assistance….
END_OF_DOCUMENT_TOKEN_TO_BE_REPLACED

Would you like to build an outstanding organization, one that progresses from good to great and beyond? Then you must have a clearly articulated vision and enough intel to guide you and your team. Many entrepreneurs lack a clear understanding…
END_OF_DOCUMENT_TOKEN_TO_BE_REPLACED

I’m sure you’ve heard the many stories of cyber hacking that have occurred in recent months and years, and sadly, that’s the new normal for life in the technology age. Nearly every day I come across a new, cleverer attempt…
END_OF_DOCUMENT_TOKEN_TO_BE_REPLACED