I’m not sure if you’ve noticed, but there’s an Entrepreneur Movement happening right now. 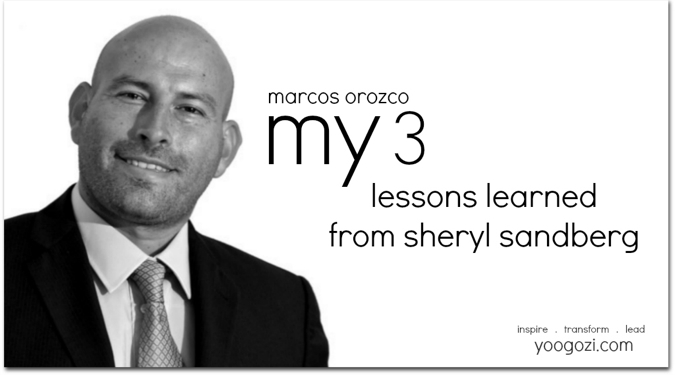 This past month I attended fellow Gentepreneur Nely Galan’s Adelante Movement ™ at the NCLR Convention at the Los Angeles Convention Center. An enthusiastic crowd of mostly female Latina entrepreneur with standing room only, closely listened to Nely Galan interview Facebook billionaire Sheryl Sandberg. I was taking copious notes and the crowd was fully engaged with the conversation.

As the only boy in my family, my mother and father taught me to respect and appreciate women. Needless to say, what I learned from Sheryl was eye opening and inspiring.

1. Women are the fastest growing segment of Entrepreneurs in the country and leading that charge are Latina Entrepreneurs.

Over the last 10 years, there has been a 200% growth in Latina-based businesses, compared to 55% made by their non-Hispanic counterpart. Studies show the Latina entrepreneurs have a start-up rate of six times the national average. Firms owned by Latinas are estimated to be 944,000 as of 2013, and employ over 400,000 employees, and are responsible for generating over $65 billion dollars in revenue. Yet, there’s still a lot to improve upon according to Sheryl, who founded LeanIn.org.

2. Only 7% of women negotiate their first salary out of college, compared to 57% of men who negotiated for better terms of employment.

In my opinion, nothing is more powerful than a confident woman who dares to negotiate, and know what she’s worth to a company or client. According to recent studies, that is one of the main reason women in the workforce only make 78% on average of what a man makes for the same job.

3. “If half of the Countries and half of all companies were run by women, this world would be a better place.”

I have to admit, the way she said this…gave me the chills. I always said to my mom, “if women ran the world, we would live in a much more peaceful place, because women leaders, especially mothers, would think twice before sending their children to kill another human being in a senseless war. They would think from a more reasonable perspective and come up with better solutions.”

Some of you men reading are probably thinking that I’m a “Yes, Ma’am” type of guy, and I would highly disagree. I’m just speaking without ego and from observation of our historical track record of men rulers…the world has probably never seen global peace because of governance of the male species.

“I want every little girl who is told she is bossy to be told she has leadership skills.”
~Sheryl Sandberg

Sheryl mentioned that she won’t be around to see a major shift of equality that she’s fighting for, but she’s planting seeds for her daughter and grandchildren to see progress.

Entrepreneur, Speaker and Author, Marcos Orozco is the Founder of Gentepreneur.com and the Gentepreneur Podcast. Born in the post-revolution oppression of Nicaragua, he fled with his family from one war zone to another, ending up in Gardena, California, where local gangs fought for drug turf which resulted in mass casualties of young Black and Latino teenagers. Marcos has evolved into a successful entrepreneur who dedicates time to his son, and enjoys giving back to his community.

What are your thoughts on the lessons Marcos learned from Sheryl? Have you felt discriminated against in the work force or in your personal life? We would love to hear your personal experience.

Operations are the support systems that enable your success. They are a necessary part of playing the game in today’s business world. Many entrepreneurs have no systems in place, or their systems are in their heads where no one else…
END_OF_DOCUMENT_TOKEN_TO_BE_REPLACED

Entrepreneurs are often reluctant to ask for help because we’re such a self-reliant bunch. We tend to believe that we “should” be able to figure everything out on our own, and then make it all happen without any outside assistance….
END_OF_DOCUMENT_TOKEN_TO_BE_REPLACED

Would you like to build an outstanding organization, one that progresses from good to great and beyond? Then you must have a clearly articulated vision and enough intel to guide you and your team. Many entrepreneurs lack a clear understanding…
END_OF_DOCUMENT_TOKEN_TO_BE_REPLACED

I’m sure you’ve heard the many stories of cyber hacking that have occurred in recent months and years, and sadly, that’s the new normal for life in the technology age. Nearly every day I come across a new, cleverer attempt…
END_OF_DOCUMENT_TOKEN_TO_BE_REPLACED